What is a vector?

So, what exactly is a ‘vector‘?

Like so many other words, it seems to mean something different in different ‘disciplines’.  But, deep down, the meanings are connected through the root of the word, ‘vector‘.  In Latin, it means ‘carrier’ – so, in all its uses now, it implies a direction, an increase or decrease, or another dynamic component to the basic information it, well, carries.

Recently, I have read a most excellent – clear and understandable – explanation of what it is that a ‘vector’ is.  So, with CodeSlinger’s permission (and a few illustrations and links thrown in by me), without further delay…

VECTORS: a tutorial by CodeSlinger

The simplest model of a vector is a directed line segment.

Then you can represent any point on the plane by a sum of appropriately scaled copies these two vectors.

No amount of scaling will turn either of these vectors into the other.  Thus we say they form a basis of the plane, which is what were anticipating when we called them basis vectors in the first place.

Of course, this basis is not unique.  Any two vectors which are not parallel form a basis of the plane in which they lie.

Most of us are used to selecting base vectors which are at a right angle to each other, such as the x-y axis.

However, it always takes two of them, so we say the plane is a  two-dimensional space.

If a set of vectors forms a basis for a space, then we say that the basis spans the space.  The essential defining characteristic of a basis is that none of the N vectors can be obtained by any combination of scaled copies of the remaining N-1 vectors in the set.

When a basis has this property we call it an orthogonal basis.  Going back to our plan , for example, we now have the x and y directions familiar from graphing.

We can treat any set of N mutually exclusive and jointly exhaustive properties (also called degrees of freedom) as a set of N basis vectors in an N-dimensional representation space.

A representation space is just the set of all possible combinations of these properties.  For example, red, green and blue.  Any colour visible to the human eye can be represented as a sum of appropriately scaled red, green and blue components, but neither red, green nor blue can be obtained by any scaled mixture of the other two. 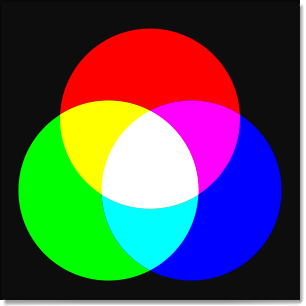 Thus we say that red, green and blue are the 3 basis vectors of a 3-dimensional colour space.