Or: How the Democratic Party Machine Elected Trump

Over eight years ago, few people were willing to accept my (seemingly counter-intuitive) insistence that the most vigorous campaigners for Obama’s 2008 election as this nation’s President were Bush 2.0 and John McCain.

From the outset of that year’s presidential election cycle, Bush’s abject failure to sense (much less avoid) conflicts of interest—which he was unable to identify, even when they bit him on the neck—thoroughly neutralized his projected “aw-shucks” image of a cowboy-hat-wearing, pork-rind-eating, broccoli-hating, down-to-earth Texan. None of this was helped by the dichotomy of a Yale graduate who persisted in making the sort of embarrassing linguistic gaffes one might normally associate with Professor William Archibald Spooner.

Equally catastrophic to that year’s Republican Party hopes were perceptions gathered by two or three generations of young voters, few of whom could either conceive of McCain’s truly admirable Vietnam Conflict-era sacrifices (e.g., intentionally declining early release from a Viet Cong prisoner-of-war camp), nor realize just how incredibly damaging it was for him to admit (in the face of an emailing, Blackberry-addict, Social Media fluent, glib-tongued huckster) his total lack of understanding about how email and the internet worked. McCain’s message may as well have been, “Elect your Grandpa!!!”

Faced with a smooth and tech-savvy Democratic Party nominee—whom many Liberals extolled as nothing less than the second-coming of Jimmy Hendrix—this disastrous combination of Bush 2.0’s radioactive political legacy and McCain’s high-tech ineptitude rendered both of them as nothing other than walking billboards for (what should otherwise have been) an otherwise intensely vulnerable and thoroughly unproven opponent.

Nevertheless, this totally inexperienced, anti-American, Black Liberation Theology dilettante of questionable birthright managed—despite being an actual mulatto—to play the Negro Race Card with all the finesse of a slum-dwelling, street corner, three-card-molly-playing con artist. Few, if any, ever even managed to twig on the fact that this supremely coddled, pretentious Ivy League wanker was summoning forth some of the most racist and discriminatory codicils of Jim Crow doctrine (i.e., the “One Drop” rule) in order to label himself as being authentically “Black”.

For the better part of a decade—not only did this consummate partisan charlatan bow before (and bare our nation’s collective neck to) its very worst ideological enemies—he also managed to erode the political and racial fabric of America in ways which will require, not just time, but a degree of labour-intensive reconciliation that will always be awkward for those who didn’t instigate the initial transgression.

Much like my counter-intuitive assessment of 2008’s campaign influences, this year’s election cycle saw President-elect, Donald Trump, propelled into office by none other than Barack Hussein 0bama and Hillary Rodham Clinton. The only significant difference being that it was candidate Hillary’s political legacy which glowed with gamma ray radioactivity, whilst 0bama merely exuded the sort of command-level incompetence normally associated with Gomer Pyle. 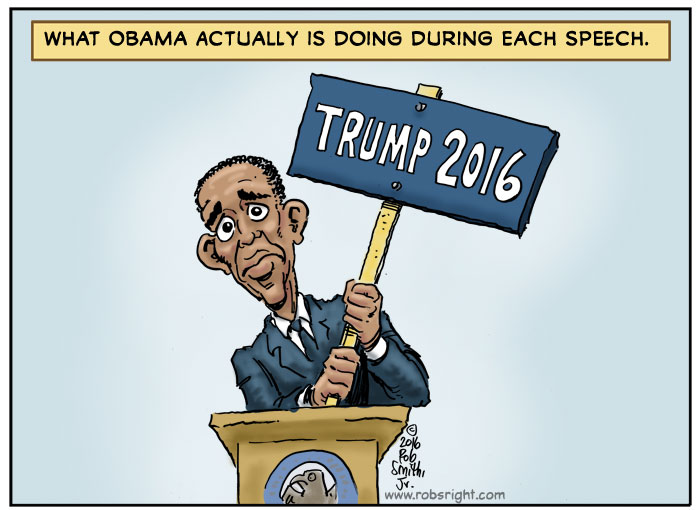 Below is a laundry list of the Democratic Party’s preposterous blunders—any one of which could have been fatal. When taken in combination, they assume almost unimaginably toxic proportions.

With more accumulated political baggage than Joe McCarthy and Richard Nixon combined, the notion that gender bias (akin to the racial bias that helped carry 0bama to victory) would, somehow, sweep Hillary into the Oval Office amounted to fantasy-level statistical projection. Subsequent demographic analysis showed that Hillary received a meager one percent more votes than 0bama did from women voters. All of which goes to show that having a vagina is not a presidential qualification.

Using the Internal Revenue Service as part of enacting a partisan witch-hunt represents such an abuse of power that it could only sharpen all further election-year sensitivity to any other sort of foul play. Preexisting public mistrust (if not outright hatred) for the IRS only served to further heighten accompanying outrage and perception of wrongdoing. This tainted the White House in ways that only reduced its ability to sway public opinion in favor of an already unpopular Hillary.

Director James Comey could not possibly have ignored how preposterous it would appear to open a second investigation into Hillary Clinton right before Election Day and then—just as promptly—quash it, citing lack of evidence. This is especially so when a federal Judge balks at [a] five-year timeline for release of Clinton emails. U.S. District Court Judge James Boasberg (nominated by 0bama) stated how he was “not satisfied with saying, ‘Fine, go ahead and take five years to do this,'”. Yet, magically, Comey’s investigators reviewed some 650,000 emails in just a few days’ time.

Whether it was demonizing Trump himself or lumping together his supporters in a “basket of deplorables”, Hillary and the Democratic Party both alienated many undecided voters—or Bernie Sanders fans—and infuriated America’s Republican base in ways that probably galvanized even reluctant Conservatives. As an aside, there were likely a large number of hesitant voters that were activated by the insane spectacle of “Never Trump” Republicans essentially propelling Hillary Clinton’s campaign numbers. However, far more damaging was how the media effectively forced people (afraid of censure) to avoid revealing their true voting intentions to pollsters. This allowed the press to “breathe its own exhaust” (less politely termed: “sucking its own butt”). All of which resulted in one of the most unexpected underdog wins since Truman and Dewey.

Videos like the uproarious, “Thank you Famous Actors“, were an expectable response to the smarmy and condescending tone so often encountered when our supposed (celebrity) betters sought to lecture us on how to make the right political decisions. Even Trump’s most pompous rantings imbued him with a human touch that went missing every time Hillary stepped in front of a microphone. Her wooden personality, nagging voice, and total lack of a life outside of politics suffused her with all the appeal of a proctology exam.

The constant torrent of anti-White message spewing forth from the White House and Justice department damaged the minority appeal of both candidates. However, Hillary’s blend of condescension and her soft bigotry of lowered expectations worked against her to an extent that Trump’s own flagrant missteps could not hope to surpass. This is revealed in Ezra Levant’s superb video about how, “Blacks, women, Hispanics voted for “racist, sexist” Trump“. Once again, 0bama was one of Trump’s most vigorous campaigners.

Clinton was unable to survive a descent into demonization (as in: too many of her own demons)

The storm of media-based demonizing that perpetually swirled around Trump probably allowed Hillary to delude herself with a sense of invulnerability. All by itself, her own arrogance certainly would have created such a psychological carapace. Be that as it may, a serious deficit in personal warmth and likeability slowly revealed Hillary as an imperious scold whose ability to attract popular sympathy rapidly declined into negative numbers. No amount of deliberate media-bias could conceal her obvious disdain for the common voter.

The above-mentioned deceit vis a vis her public and private personae, received even greater scrutiny once serious issues surfaced regarding Hillary’s personal health. There emerged a mottled aura of physical and mental ill-health that only served to highlight her already objectionable behavior. This was augmented by revelations from previous Secret Service details about Hillary’s profanity-laced, abusive treatment of staff in general.

A surfeit of questionable acts long prior to the presidential campaign

Be it Whitewater real estate deals, near-continuous issues of marital infidelity, the supposed “suicide” of Hillary-aid, Vince Foster“, the more recent Benghazi attack or her (totally illegal) private email servers, like used toilet paper stuck to her heel, allegations of (serious) impropriety trailed Hillary and Bill wherever they went. See: “From Whitewater to Benghazi: A Clinton-Scandal Primer“. Far more shocking is the stack of corpses that have piled up around these two over the course of their political careers. See: “The Clinton Body Count” (scroll down to mid-page). Cohabiting with a serial killer appears to be less dangerous than befriending the Clintons.

The unsteadiness of Hillary’s already tottering reputation was exacerbated by revelations of her own duplicitous self-portrayal. From: “Hillary Admits Public Persona ‘Is Fake’ In Leaked Wall Street Speech”

“If everybody’s watching, you know, all of the back room discussions and the deals, you know, then people get a little nervous, to say the least, … So, you need both a public and a private position.”

The valuable role that Wikileaks played in counterbalancing Hillary’s numerous and deliberate efforts to evade accountability (especially with respect to Freedom of Information Act requests) cannot be overstated. Julian Assange’s otherwise questionable breaches of America’s national security took on an aspect of heroic proportions that could only be made possible when contrasted with the Clinton crime family. For a last sampling of how extensive Bill and Hillary’s corruption continues to be, please read, “Clinton Foundation: Inurement“. From: The Inurement Prohibition & Non-Profit Organizations

In the Internal Revenue Code, the nondistribution constraint is embodied in the prohibition against inurement. “Inurement” is an arcane term for “benefit.” The inurement prohibition forbids the use of the income or assets of a tax-exempt organization to directly or indirectly unduly benefit an individual or other person that has a close relationship with the organization or is able to exercise significant control over the organization.

Regardless of whether or not you are a fan of Donald Trump, his victory represents one of America’s most narrow misses in terms of installing a well-developed criminal enterprise in this nation’s chief executive office.

The final question has been answered and now can be met with a sense of relief. A Juan Williams asked, “Indicted as president … impeached as president?” Regardless of personal admiration or animosity towards Trump, that we have no need to ask such a deeply disturbing question is something which America, as a nation, can only be immensely thankful for.

« Donald Trump and the ridiculous claims of ‘anti-Semitism’
Pat Condell: A Word to the Criminal Migrant »
%d bloggers like this: