Not that I know that much about them, but my older son is rather fascinated with them and is actively focusing his education so as to work with them.  As a matter of fact, he recently started his first research job in Mathematics – and, yes, it is in the field of combinatorics.

When I heard that NASA is getting a quantum computer, and that Google is going in on the deal, I got very excited indeed!

It will be shared by Google, Nasa, and other scientists, providing access to a machine said to be up to 3,600 times faster than conventional computers.

Unlike standard machines, the D-Wave Two processor appears to make use of an effect called quantum tunnelling.

This allows it to reach solutions to certain types of mathematical problems in fractions of a second. 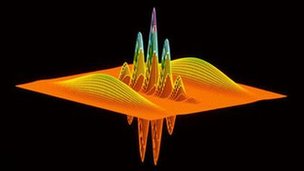 Effectively, it can try all possible solutions at the same time and then select the best.’

One Response to “NASA, Google to share a quantum computer”