The Islamic Persecution of Religious Minorities

As sad as this is, Islamic persecution of religious minorities is a fact.

Raymond Ibrahim is one person who writes about this in detail – and discusses so in this video.

Another person who speaks about this issue with knowledge and passion is Dr. Bill Warner, who is making a speaking tour of Canada.

November 16th, he will be speaking at the Pomeroy Hotel & Conference Centre in Grand Prairie, Alberta.

November 17th, he will be speaking in the Toronto Zionist Centre, Toronto, Ontario

November 18th, he will be speaking at the Ottawa Library Archives which is in Ottawa-Nepean (still in Ontario).

November 19th, he will be speaking at the Spanish & Portuguese Synagogue in Montreal, Quebec.

And last but not least:

November 20th, he will be speaking at the Ramada Beacon Harborside Inn in Hamilton, Ontario.

I myself will come to the Toronto event and am helping organize the Ottawa and Montreal events – so, if you happen to make it to one of those evenings, please, do come and say hi!

The full information about the tour is on The Freedom Community website:

Bill Warner, PhD:
What do we do now?

Christian Persecution, Jewish Persecution,
Hindu, Buddhist, Sikh, Atheist, Agnostic,
Apostate Persecution …
and Islam.
Why? And why so much silence about it?
Most of all, what do we do now? 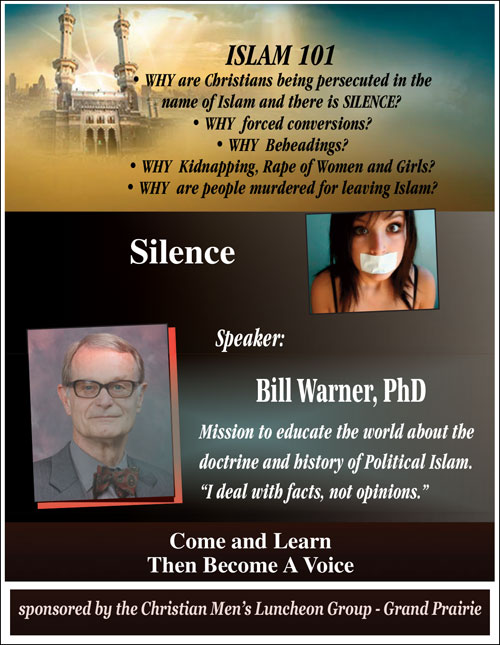 When Bill Warner saw the second plane hit the second tower, he knew this was jihad, and that confronting this would be his life work from that moment on.

And it has been.

He has studied the Islamic religious texts – the Quran, Hadiths and Sira.

He has written easy-to-read versions which are authoritative. That is, the sources are cited for every statement.

He has spoken from coast to coast.

And he continues to ask: what do we do now?

Bill Warner’s background is in science. He has a PhD in Physics. This has led him to value facts. But it was becoming clear to him that the facts were out there – and so many people were not listening.

He saw that Muslims loudly claimed the role of victim – despite massive Muslim persecution of Christians and Jews and Hindus and Buddhists and atheists and agnostics.

A Voice for the Voiceless, Bill has proclaimed.

He has dug into history, especially the brutal history of Islam, to explain why so many of the victimized are staying silent. And he is doing all he can to arouse the silent into community action.

DR BILL WARNER
will be speaking on:
– the content of Islam re non-Muslims,
including prohibitions against freedom of speech;
– the content of Sharia re non-Muslims;
– the 1400 history of Islam, including the persecution
and victimization of Christians, Jews,
Hindus, Buddhists, atheists, agnostics
as well as Muslims who disagree in
any way with the Muslims in power;
– and the quest for effective action
to reach people with this information,
especially to reach them on an emotional level.

Dr Bill Warner.
Courage, Conviction, Perseverance.
From Political Islam,
to 1400 Years of Terror, to …
A Voice for the Voiceless. 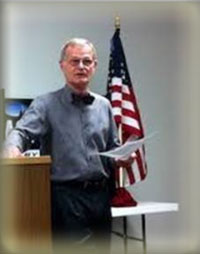 “My mission is to educate the world
about the doctrine and history of Political Islam.
I deal with facts, not opinions.”

A Special Thank You
Individuals who take action are so important.
For this event, many thanks to
the Christian Men’s Luncheon Group
in Grande Prairie.
It has been instrumental
in bringing Bill to Canada.
Its members realize
that the education of Canadians
with regards to the ideology of Islam
is desperately needed.
The group also brought
Robert Spencer in 2013.

« John Robson – Hey Liberals! Stop blaming the West for 14 centuries of Islamic aggression
We Remember! »
%d bloggers like this: