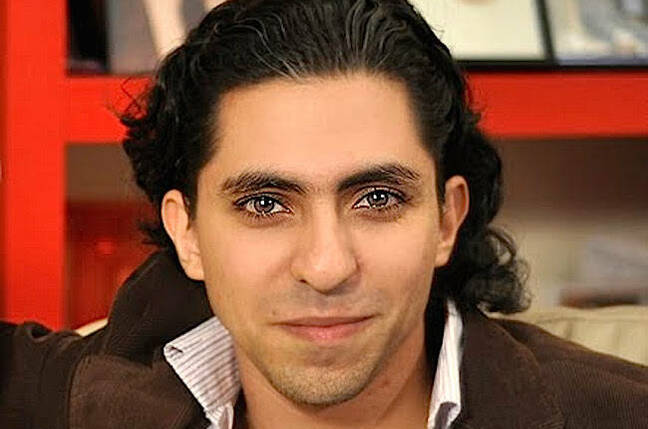 Photo (I think) by 8 Jan 2015 at 22:35, Iain Thomson
Look at that young man!
Look at the spark in his eyes!
It may soon go out!
Because the Saudi judicial system had sentenced him to flogging!
ONE THOUSAND LASHES!!!!
His name is Raif Badawi and he is a Saudi Liberal.  Liberal, I believe, in the classical sense of the word – not in the snoveling progressive brain rot way.
So, what was this beautiful young man’s crime?
Did Rafi Badawi kill, rape, maim or torture?
Did he stomp on kittens or kick puppies?
NO!!!!!!!!!!!!!!
All he did was make a facebook post.
A facebook post that was mildly critical of Islam.
And not in Charlie Hebdo way, but in a respectful expression of his struggle to actually believe the drivel in the Koran.  OK, he used nicer words than I – but you get the picture.
And for this, this father of three is sentenced to 1000 lashes and 10 years in prison.
Please, remember his name.
Remember his face.
And don’t let the attention generated by one brand of Islamists detract from the suffering of this brave human soul and from the crimes being committed by a ‘respected’ state who is a major player on the World stage!!!