Humour is the best medicine.  It is also the best weapon against bullies, totalitarians, or anyone who takes themselves too seriously.  Perhaps that is why humour is one of the first things curtailed when freedom of speech is threatened.

We have seen various comedians in the US lament how Political Correctness is preventing them from performing on college campuses.

We have seen Canadian comedians fined thousands of dollars for telling a politically incorrect joke.

We have seen German comedians charged and threatened with extradition to Turkey for authoring a humorous poem about Recep Erdoğan.

Well, some of us know…

Perhaps those who lived behind the Iron Curtain remember it better than most of us. Perhaps that is why they cherish their Freedom of Speech and why they use humour to ensure it does not become as eroded as it has become in much of The West.

And Czechs do love their humour.  It is therefore not surprising that Dr. Martin Konvicka, a brave patriot who is fighting to preserve his cultural heritage – and his freedom of speech – and his organization IMK (Iniciativa Martina Konvicky) have turned to humour to deliver their message.

And deliver it they did!

On August 21st, Czechs mark the anniversary of the invasion of Czechoslovakia by the Soviet Union of and the rest of their Warsaw Pact ‘allies’.  This invasion had ended the liberalization of Czechoslovakia, called Prague Spring (after which the Arab Spring freedom movement was named), and was opposed by the vast majority of the population.  Yet, when it became clear that the invaders were going to succeed in rolling back the progress towards liberalism and that hard socialism would indeed be imposed, many people had started licking the heels of their oppressors in order to improve their social status.

Now, Europe is experiencing a very different type of an invasion:  millions of young, strong, able-bodied Muslims are flooding in, falsely claiming to be fleeing war, and imposing Sharia restrictions on the Freedom of Speech through threats of violence and massacres should the local governments refuse to impose them.  And there is absolute proof that these people are not poor refugees fleeing war:  some of the ones who had already been granted asylum in Europe – and living off of government subsidies – are also holidaying in their countries of origin.

Dr. Konvicka and IMK took the opportunity to draw parallels between the two invasions:  the  invasion of Czechoslovakia by their socialist brothers on the one hand and the Muslim invasion on the other.  And the anniversary of the Warsaw Pact occupation was the perfect occasion!

As you can see from the videos above, it was a fun skit, people were enjoying it, except for the few who disagreed with the message – and who were not afraid to say so…which they would presumably be if they had thought this really was ISIS.  Despite all of this evidence, Czech and International media corporations have universally reported panic, injuries and havoc…

And that is why you have to go to the blogosphere to see what had actually happened.

Following this street theatre, Dr. Konvicka was kind enough to grant this interview:

As you can see, humour is an effective tool to use against totalitarians of all stripes (or stars).

After the skit, many ‘Progressive’ politicians demanded an investigation into how Dr. Konvicka had managed to get a permit to stage this skit, calling for the bureaucrat who had granted it to be fired and Mr. Konvicka to be charged with something.  Anything!  Spreading false news, perhaps?  (Would this not apply even more to the mainstream media?)

Well, there is still some sanity in Czech and the investigation had concluded just last week and found that everything was fine, and nobody has to get fired or charged with anything.  Even more sanity:  a judge has just dismissed all charges against the protesters who had carried gallows during last year’s anti-migrant demonstrations.

And Dr. Konvicka is far from being done.  To mark the 15th anniversary of the Islamic attack on the Twin Towers on 9/11, he held a demonstration in front of the Saudi Arabian Embassy in Prague:

The event took place on the 11th of September, 2016, in front of the Saudi Arabian Embassy in Prague, from 2 pm until it had been disbanded about 30 minutes later.

The large sign behind Dr. Konvicka, hanging on the Saudi Embassy fence, has a delightful little rhyme:

WITH A LITTLE GIRL

Dr. Konvicka was not the only one to speak at this demonstration.  Beata Radosa, a former Muslima who explained that she used to believe that a hijab would keep her modesty and protect her from sexual harassment.  When wearing the hijab did not protect her from harassment by Muslim men, she began to loose her faith and eventually left Islam. Now, she is an activist and a blogger.  Her site (in Czech) is called Women Against Islam.

And, she writes, the Port-a-Ka’aba was such a danger to public safety that a whole squad of police in riot gear had to come and monitor the situation.

Martin Vitek was the third speaker and he pointed out some negative aspects of Islam and how they are connected to Saudi Arabia.

The lesson of the day?  ‘Piss Christ’ is art, ‘Dung Madonna’ is art, but ‘Port-a-Ka’aba’ is hate speech.  And the Czech Republic, despite being one of the most enlightened societies, is perfectly willing to use physical force to curb speech it does not like.

Czechs are, however a tenacious peoples.  (Is it still allowed to say that or is that now racist?)  Dr. Konvicka and IMK are planning more activities:  on September 17, 2016, and on November 17, 2016.

Stay tuned, dear readers, for what is coming next!

Two talks: one before and one after the Draw Mohammed Day

Just for the record:  there was one Mohammed picture that was not a print, but an original painting.  In fact, it had been part of the Draw Mohammed Contest in Garland Texas.  It depicts Mohammed in the classical Marilyn Monroe pose to symbolize the harmoneous integration of Muslims into our Western society. Humour is a weapon against bullies and totalitarians:  this is why ‘cartoons’ have such power.

How to Remove Your Mustache

While I am in Calgary for the Freedom School Conference, I thought some humour might be just the thing:

More relevant today than ever! Oh, and if you thought that depicting Muhammad whom Muslims consider to be a prophet is forbidden by Islam, here are some ACTUAL PORTRAITS OF MUHAMMAD – with his face shown – FROM ISLAMIC SOURCES!!!

Go to ‘Jesus and Mo’ for this hi-res image so you can make yourself a t-shirt: 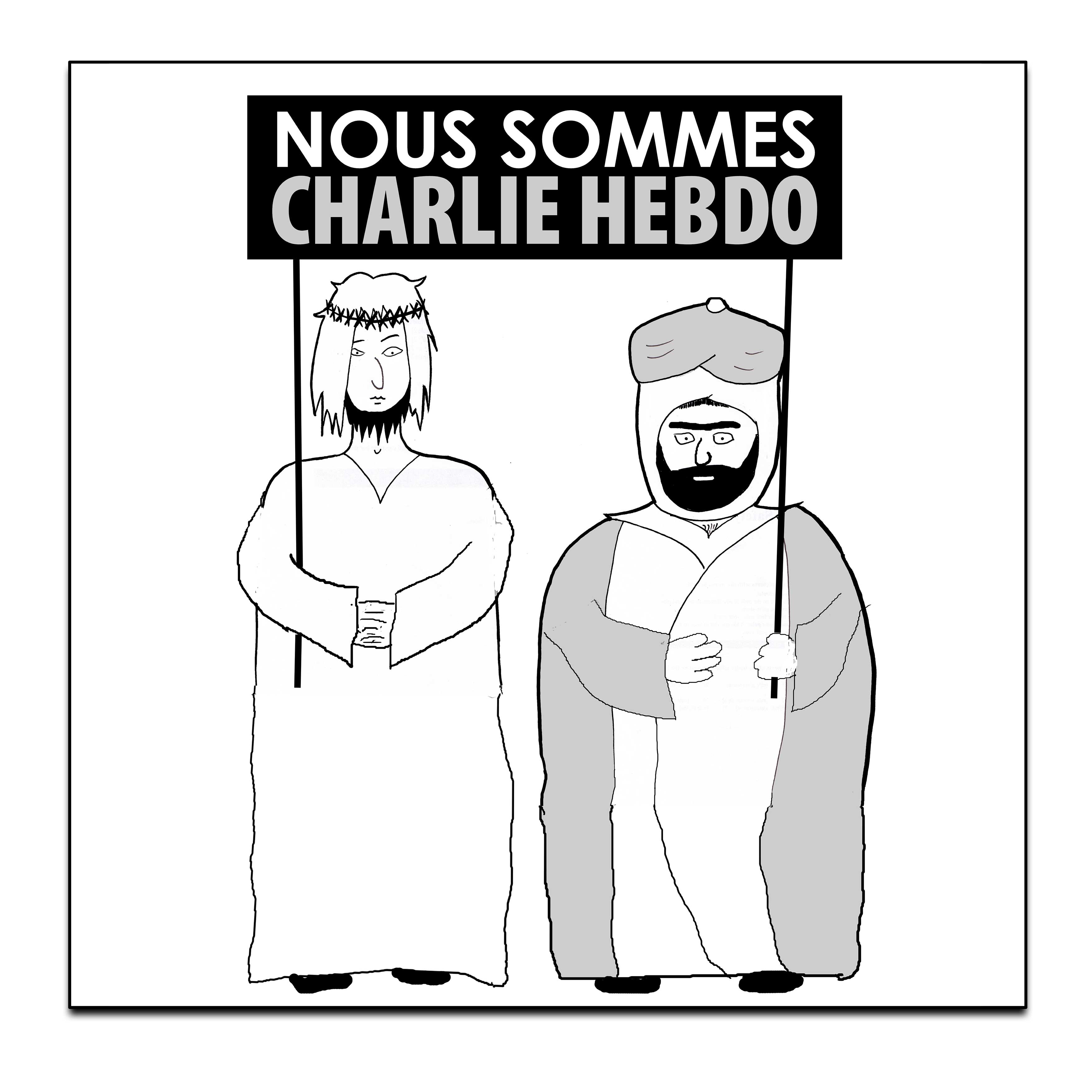 And while I’m at it:  here are some more cartoons! 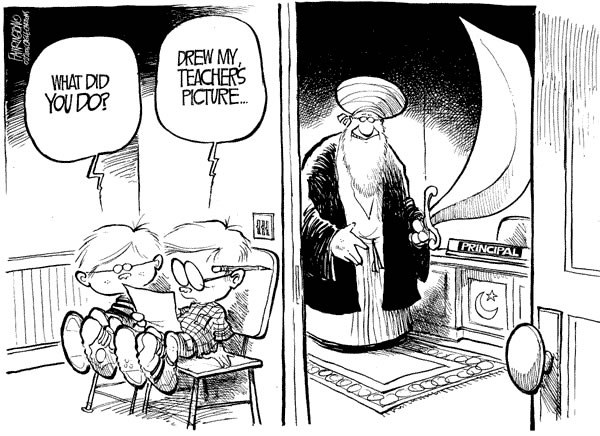 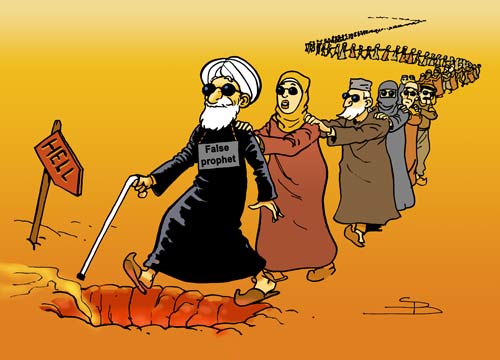 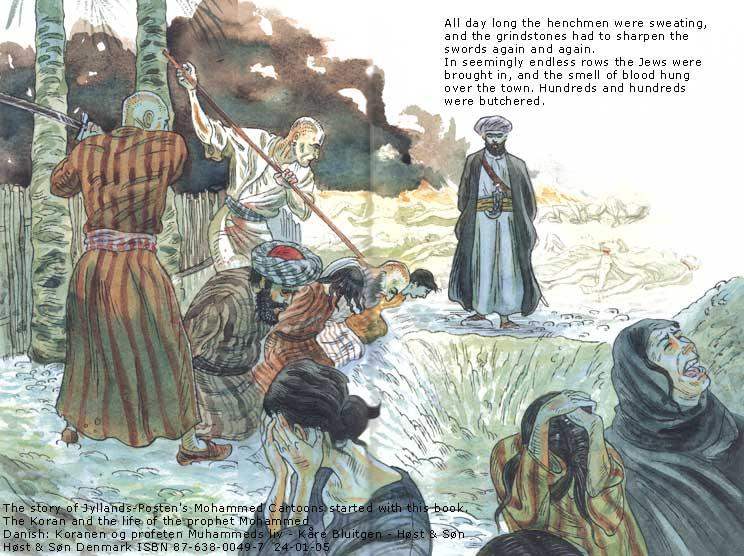 GET THE PICTURE?!?!?
And in case you are musically inclined, here is a little tune for you:
And yes – I am picking on Islam because it was Islam’s idiot followers who committed the latest set of atrocities.
BUT!
and this is a big, huge BUT!
As Steven Pinker has documented, most murders in the world do not occur out of greed or malice:  rather, they occur out of “morality”.
Yes, “morality”.
Not actual morality, but perceived morality:  the murdered believed that the person whom s/he murdered had acted immorally and therefore that the killing was justified.
So, yes, I am picking on Islam  – this time!
Note:  post was edited to fix broken links.
Posted in freedoms, Humour, religion. Tags: censorship, Creeping Sharia, freedom from religion, freedom of speech, Humour, Islam, Muhammad cartoons, religion, Sharia. 1 Comment »
« Older posts
Xanthippa's Chamberpot
Create a free website or blog at WordPress.com.
Loading Comments...